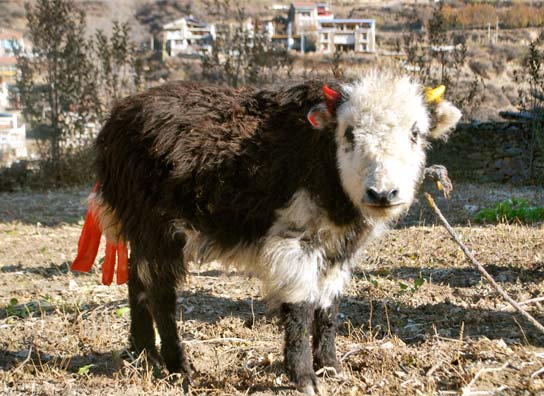 In August of 2010, I visited my family in Gyarong, Tibet. Every year since 2006, I have returned to my homeland in Tibet to visit family, of course, but also to perform animal liberation – of yaks, cows, and other animals.

When I arrived at my family’s home, I asked  my brother to check with the nearby slaughterhouse for new yak arrivals.  I awoke the next  morning and to my surprise, I looked out the window and saw my brother walking along the road some distance away leading a large male yak, with a tiny baby yak in tow. This was unusual: baby yaks, like other animals, stick closely to their mothers, not the males. Even so, that baby yak stayed put by the male, as if he were his own mother. I wondered what had happened that made this little yak’s world turn upside down.

When the small “herd” reached my family’s house, I understood.  My brother explained that the baby yak’s mother had probably been slaughtered, and the little one was likely to be slaughtered, too.  He had purchased the male from the slaughterhouse, and since the baby cost only 250 yuan, or about $40 dollars, my brother purchased and rescued it, too.  The baby clung to the large male – his substitute mother – on the walk away from the slaughterhouse, perhaps as its only perceived way to safety.

Earlier in the year my wife, Pema, and I had had our first baby, Tenzin.  The joy and sense of fascination I felt holding this tiny, new life in my arms was indescribable.  The responsibility I felt as a new father to protect my son was immediate and strong, and it radiated to other young beings.

This little yak was younger than my son.  He could not have been more than two months old; surely he missed his mother.  Though a baby, he seemed so strong, yet so fragile.  He might have been looking for his mother when he went missing the first night; the next morning we found him some distance away, evidently having fallen off a low ledge on our land.  Overcome with a need to protect this little orphan, I resolved to help him adapt to life without a mother.

I gently inspected the baby yak and petted him.  Looking into his eyes, I was moved. Growing up in Tibet, I had come to understand that each yak has such a different personality – just like people – and, though the baby yak was developing more each new day, his personality was growing on me.  The yaks of my native land have so much character.  I knew that this one, if allowed to grow and roam free, would be majestic, too.

Had his mother still been with him, she would have been suckling him.  He must have been hungry.  At first, we drew yak milk into a bucket and let the baby lick it from our fingers and cupped hands.  He quickly learned to take the milk himself; later, he learned to graze the fields.  We kept him at our house for several months in this manner.  It was an unusual thing to do – to keep a yak as a kind of “pet” –  but my family enjoyed seeing him grow in freedom. 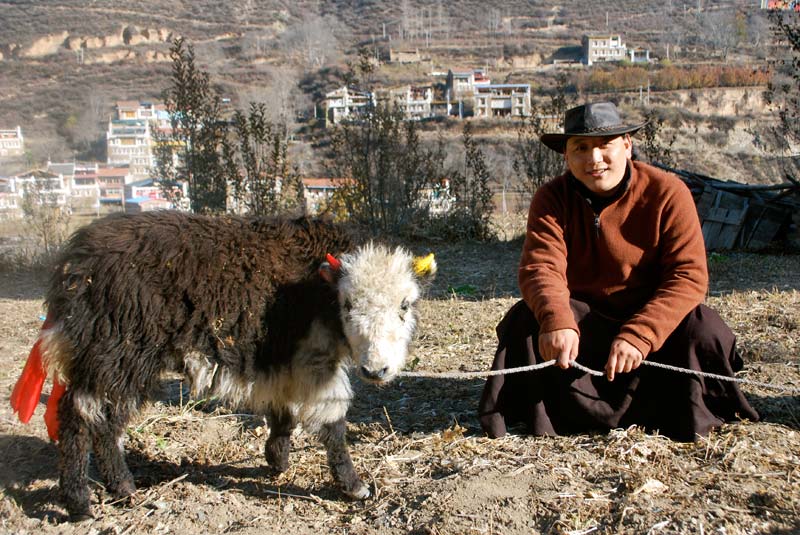 I had to leave and return to my home in the United States, but before I did I painted his little horns the yellow and red that signify his rescue and protected status.  We also performed some special prayers for him and gave him blessing pills.  This was done to help ensure that he lived a long and prosperous life, and that he took a favorable rebirth.

I was delighted to hear reports from my family that the baby yak grew up to be very large and strong.  He has since been released into the mountaintop sanctuary belonging to Tsethar International and is now in the happy company of other rescued yaks.

I had performed yak releases before – once of a pregnant yak – but this was the first time I’d released an animal so young.  Words cannot completely express the joy and gratitude I feel in having had the opportunity to rescue this little yak.  May there be many more.